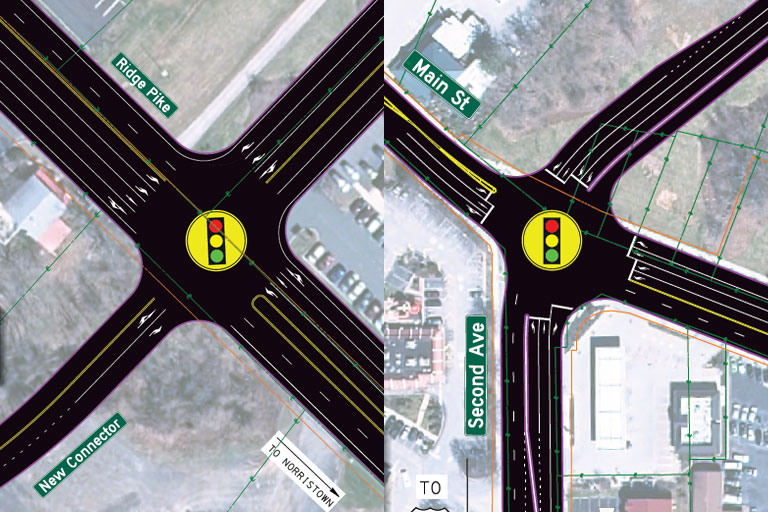 At a November 14, 2018 public meeting at Methacton High School, PennDOT presented a Public Plan Display for the Perkiomen Crossing Project. The plans outline for public input, road improvement projects on both sides of the Perkiomen Bridge in Collegeville Borough and Lower Providence Township.

PennDOT and the affected municipalities would like to replace the region’s notorious dogleg and Y intersections—located at either side of the Perkiomen Bridge—with four way intersections. Together with other improvements these more efficient intersections will provide higher levels of service. The presentation was a high level overview of traffic planning and road construction that will carry over into 2023 and possibly later. Construction is expected to take 2 years.

The planned improvements in Collegeville Borough would eliminate the dogleg intersection at the Ridge Pike and Rt 29 (First and Second Avenues) in favor of a four-way intersection with signalized turning lanes.

The “dogleg” intersection has been the subject of study recently as part of Royal Farm’s proposed land development in the empty lot at that location. If Royal Farms goes through with its development it will contribute over a million dollars to the cost of realignment. In this case Rt 29 will be configured to allow the developer a larger parcel, and to allow safe ingress and egress of the property and the adjacent Power House. Also, Royal Farms and PennDOT acting together would develop the intersection much earlier than PennDOT alone.

The Collegeville Borough intersection plan shown at this meeting differed from the Royal Farms plan in that it provides a smaller developable lot in the middle. If Royal Farms abandons its effort, PennDOT will design and build the simpler version presented here.

The alignment of the latter connector will eventually allow for a second bridge over the Perkiomen Creek entering Rt 29 in Collegeville Borough near Wendy’s Restaurant. This second bridge—long a pipe dream in the Collegeville region—is not currently on any plan, but a sketch can be seen in a recent Lower Providence presentation.

Addendum: The proposed plan for Ridge Pike and Germantown Pike road reconfigurations on the Lower Providence side on the Perkiomen Bridge was reviewed/discussed by PennDOT at a meeting held on Aug. 16, 2019.  Afterward, PennDOT informed affected township and borough managers that the project is funded and has a projected construction start date sometime in 2022.

Benefits and Next Steps

PennDOT cites the project benefits as:

High level overview pubic meetings like this are the first step in the process. The next three steps prior to putting out bids and construction are:

PennDOT would appreciate any feedback on this plan. Reach out to Consultant Project Manager Nathan Parrish at [email protected].